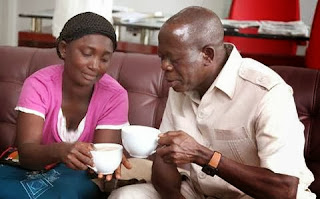 Governor Adams Oshiomhole of Edo State on Monday met with the the widow he insulted in a major road in the state while on an inspection tour and donated two million naira to her, after an apology:

“Let me apologise to you for the way I spoke to you, I am very sorry about the statement. I have also realised that even in anger, one could still achieve the same result that he set out to without provocative outburst. I apologise from the bottom of my heart.”

The widow, Mrs Joy Ifije, who was invited to the Edo Government House by the governor, was also offered automatic employment by Governor Oshiomhole to take her off the street. She was so happy…

Oshiomhole had invited the widow to personally apologise to her over his uncomplimentary remark which had generated controversies in both the conventional and social media in since last week.

Oshiomhole’s action has frustrated the PDP in Edo State that were trying to play politics with the matter.

The governor used the opportunity to advise against risking their lives to trade on high ways. He said trading on the road and walk ways could hinder free flow of traffic as well as cause accidents.

He added that his government will continue to change the face of the state with infrastructural development.

On her part, the widow, Mrs Joy Ifije, pleaded with the governor to forgive her for flaunting the law of the state and promised to do better next time. She said: “I know I was wrong, that was why I quickly knelt down to beg when I realised I was face to face with the Governor.”
Funny enough, the widow promised to help government advise other women not to trade on the road side.