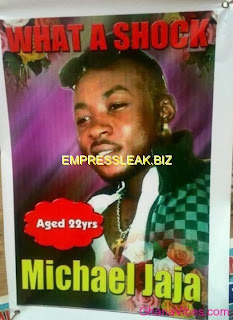 A 22 year old boy, Michael Jaja a resident of Tema has abruptly ended his ‘sweet life’ after his 48-year old sugar mummy decided to call it quits.

The young boy, who has been the old lady’s ‘pet boy’ has enjoyed the luxury of receiving a Toyota Corolla as a gift and a fully paid trip to Dubai and China. He also lived in his sugar mummy’s husband’s house.

All seemed well between the Boy and The Woman until the woman broke the news of the return of her husband from abroad prompting them to end the relationship. This obviously didn’t go well with Michael who threatened the woman to kill himself if that happened and true to his words Jaja went ahead to kill himself. Sources told GhanaVibes.com the couple first fought over the acid with droplets sprinkling on the woman’s face.

According to Jaja,he couldn’t see himself going back to his old and poor lifestyle after all the luxury he had seen.

May Jaja’s Soul rest in Peace,, This Happened In Ghana