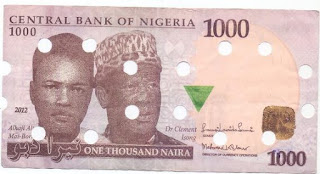 A Lagosian claims an ATM in Lagos dispensed fake money to him. Because it’s an accusation and nothing has been proven, I removed the names of all the banks he mentioned. Read his story below…

I made a withdrawal of N48,000.00 at *** ATM Ajose Adeogun branch (Victoria Island, Lagos) this afternoon. Immediately, i went to *** bank(ajose branch too) just after where i did my withdrawal to pay in N12,000.00. From there i went to **** bank (ajose branch too) to make another deposit. On getting there i filled my teller and waited on the queue for me to be called. i got a call from the teller and went straight to him, immediately i gave him the money as i wanted to deposit N5,000.00 he told me that the first N1,000.00 was fake and that where did i get it from, i told him that i just withdrew the money from *** ATM Machine (ajose branch) and he now told me to go back to the branch of the bank where I made the withdrawal to make a formal complaint and this i did (at this point he had perforated the N1,000 note he called fake)

Getting to the **** branch, i met a staff of *** who directed me to another colleague. I explained to the guy everything that happened and he was kind of not buying the story that the fake N1,000 was not from their ATM Machine, but he said that it was very possible for things of such to occur. i then asked him to help me scan the remaining cash i withdrew from their ATM Machine so i would know if their was still more of the fake currency with me which he did not want to, so i told him i wanted to see their manager and he did directed to  the manager. I saw her and explained every thing to her and all she could say was they don’t dispense fake currency and that she was sorry about everything.
Eventually they scanned the balance of my cash.
The bottom line is that there is a criminal in that branch that must have done this and we don’t even know if there are still more of those fake cash inside their ATM machine. This is how so many people die for no just cause because imagine if i had gone to a place like Oshodi with such money to buy stuffs  unknowingly and then One old woman will just screen Ole and you know happens next.
Only God know how many victims are out there but keep quiet because they personally feel its not worth the noise and all.
Everybody should be careful and beware!!!!
Please find attached the perforated N1,000 bill