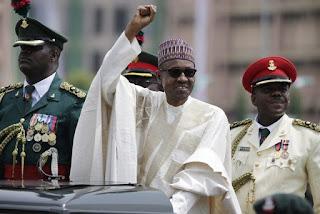 President Buhari is scheduled to meet with Governors of 36 States tomorrow to address the dire economic troubles of the issue of unpaid civil servant workers across the country.
State governments not paying workers has been a major issue in recent months, most notoriously in Osun State where workers have been without pay for months.
This meeting was called after an appeal by the 36 State Governors for a Presidential intervention into the empty accounts and inability to pay civil and State servants. The focus of the meeting will be the sourcing of funds to enable the affected States to pay their debts.
Governor Aregbesola of Osun State has been under intense pressure by the civil servants in his State. His spokesman, Semiu Okanlawon, told SaharaReporters that “this issue [financial instability and inability to pay workers] didn’t start today, we gave enough notice to Nigerians that this was a problem.”
He added, “we are not surprised about this issue.”
Mr. Okanlawon also told SaharaReporters that “[Governor Aregbesola] is optimistic that the result from these meetings” will be good for the people of Osun State.
He also admitted that the federal government giving money to States to pay workers will need to be part of the solution. Mr. Okanlawon also said that “States need to raise revenue so we don’t rely on the federal government.”
Another government official from a State in fiscal crisis told Vanguard that “the President has graciously accepted our overtures to him to help us. Some of us are owing workers over nine months salary arrears and this has brought activities in the public service to a standstill.”
The 18 States that are currently indebted to their workers are Abia, Akwa Ibom, Bauchi, Benue, Cross River, Ekiti, Imo, Jigawa, Kano, Katsina, Kogi, Ogun, Ondo, Osun, Oyo, Plateau, Rivers, and Zamfara.
A source from the executive government reported that resolving this issue may force the Federal Government to draw from depleting external reserves.