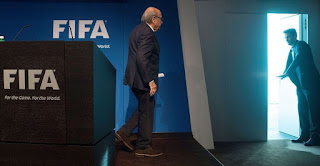 Sepp Blatter is now at the centre of the FBI’s corruption probe after the FIFA president sensationally announced he will be resigning after 17 years in world football’s top job.

Federal agents, who last week charged 14 FIFA officials with corruption, have told the American media that they are hoping those men will help them build a case against their former boss.

The revelation comes just hours after Blatter used a hastily arranged news conference at FIFA HQ to say that he will step down after his successor is elected in December this year, or March 2016.
We may not be able to collapse the whole organization but maybe you don’t need to.’
At the press conference in Zurich tonight, Blatter said: ‘I have been reflecting deeply about my presidency and about the forty years in which my life has been inextricably bound to FIFA and the great sport of football.
‘I cherish FIFA more than anything and I want to do only what is best for FIFA and for football.
‘I felt compelled to stand for re-election, as I believed that this was the best thing for the organisation. That election is over but FIFA’s challenges are not. FIFA needs a profound overhaul.
‘While I have a mandate from the membership of FIFA, I do not feel that I have a mandate from the entire world of football – the fans, the players, the clubs, the people who live, breathe and love football as much as we all do at FIFA.
‘Therefore, I have decided to lay down my mandate at an extraordinary elective Congress. I will continue to exercise my functions as FIFA President until that election.
‘The next ordinary FIFA Congress will take place on 13 May 2016 in Mexico City. This would create unnecessary delay and I will urge the Executive Committee to organise an Extraordinary Congress for the election of my successor at the earliest opportunity.
This will need to be done in line with FIFA’s statutes and we just allow enough time for the best candidates to present themselves and to campaign.
‘Since I shall not be a candidate, and am therefore now free from the constraints that elections inevitably impose, I shall be able to focus on driving far-reaching, fundamental reforms that transcend our previous efforts.
‘For years, we have worked hard to put in place administrative reforms, but it is plain to me that while these must continue, they are not enough.
‘The Executive Committee includes representatives of confederations over whom we have no control, but for whose actions FIFA is held responsible. We need deep-rooted structural change.
‘The size of the Executive Committee must be reduced and its members should be elected through the FIFA Congress.
‘The integrity checks for all Executive Committee members must be organised centrally through FIFA and not through the confederations. We need term limits not only for the president but for all members of the Executive Committee.