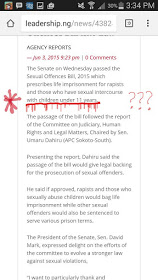 The Senate on Wednesday passed the S3xual Offences Bill, 2015 which prescribes life imprisonment for rapists and those who have S3xual intercourse with children under 11 years.According to Leadership, The passage of the bill followed the report of the Committee on Judiciary, Human Rights and Legal Matters, Chaired by Sen. Umaru Dahiru (APC Sokoto-South).Presenting the report, Dahiru said the passage of the bill would give legal backing for the prosecution of S3xual offenders.He said if approved, rapists and those who S3xually abuse children would bag life imprisonment while other S3xual offenders would also be sentenced to serve various prison terms.The President of the Senate, Sen. David Mark, expressed delight on the efforts of the committee to evolve a stronger law against S3xual violations