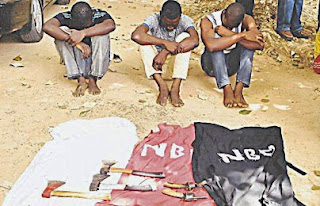 Minna – A 500- level computer science student of Federal University of Technology (FUT), Minna and nine others have been arrested by the Niger State Police Command for alleged cultism. The suspects were said to have been caught with pistols and other dangerous weapons.After preliminary investigations by the police, sources said seven of the suspects were screened out, leaving three out of which two are students of FUT, Minna.They include the 500- level computer science student and another 200- level student.The trio, according to the police, belong to Neo-Black Movement (NBM) a.k.a Black Axe. *The suspects with arms allegedly recovered from them The state Police Commissioner, Mr. Olusola Amore, said 10 suspects were arrested after a tip off by members of the public at RafinYashi while planning to initiate new members.He said two locally made pistols, three live ammunition 9mm caliber, three axes and three pairs of fraternity uniforms were recovered at the spot of their arrest. The 500-level student, who claimed to be the leader of the gang, said he was initiated into the gang four years ago to fight injustice and oppression in FUT, Minna and also get connected.”I have been in this gang for four years, but I have never fought against any form of injustice because our school, FUT, Minna, is calm. My parents are in Lagos and still together but they are not aware that I am in this problem. In fact, I am regretting being in this mess,” the self-confessed cult member said.On his advice to other students, he said,” I don’t advise even my enemy to belong to this gang because there is nothing to gain from it. I personally am regretting now. Cultism is not good”. Tears rolled down his cheek as he spoke.On whether he knew of other members, he simply said,”I am about to graduate; so I don’t know of other members.” Vanguard