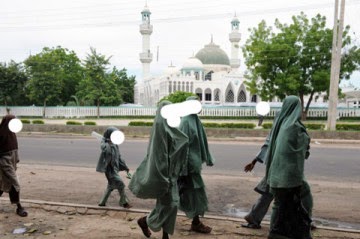 There are strong indications that the terrorist sect, Boko Haram, may have moved some of the over 200 schoolgirls it abducted from Government Secondary School, Chibok, Borno State out of West Africa.
There were reports on Friday that some of the abducted schoolgirls were seen in Birao, Central African Republic with armed men.  Birao is a small town in the north of the CAR.
The Islamic sect had abducted pupils of the school on April 14 and taken them into the forests along the Nigeria-Cameroon border.
Over 50 of the pupils escaped while being moved out of the school.
An online report by a French news medium,Jeune Afrique, on Friday, said villagers saw about 50 young women led by armed men in the North Central African Republic last week.
The report was translated into English by one of our correspondents.
The report says, “The Nigerian schoolgirls abducted by Boko Haram have passed through the northern CAR, escorted by armed men. Based on several testimonies of inhabitants, the women arrived Wednesday, April 30 aboard trucks.
“They were guarded by heavily armed men, who spoke English, and also members of the former (CAR) rebel Seleka.”
Seleka is an alliance of Islamic rebel militia factions that overthrew the Central African Republic government early last year and installed their leader as president. The group which has reportedly carried out several executions, rape and looting split last year with Christian and Muslim factions terrorising the CAR, forcing France to send more troops to the region.
The French newspaper added that natives of Birao were afraid to approach the kidnapped girls.
“According to our source, the convoy of two trucks and a pickup was previously seen at Tiroungoulou (about 170 kilometres southwest of Birao) and perhaps Chad.
“Upon arrival, some were frightened, cried and were violently rebuked in English. The girls and their guardians were then housed for several days in a house.
“The group reportedly left the scene on the night of Sunday to Monday, May 4 to 5, without a trace,” the report said.
Barely 24 hours after President Goodluck Jonathan said no group had claimed responsibility for the abduction of the pupils, Boko Haram leader, Abubakar Shekau, claimed responsibility for the abduction.
Shekau, while claiming responsibility for the seizure of the girls in a video, threatened to sell  the abducted girls. “I abducted your girls. I will sell them in the market, by Allah,” he said.
Earlier, there were reports that the girls were taken to neighbouring Cameroon and Chad.
The Cameroonian government however faulted reports that some of the teenagers had been married off in the country.
Cameroon’s Minister of Communication, Issa Tchiroma Bakari, was quoted as saying he was shocked by accusations that Cameroon was not collaborating with Nigeria to free the girls from their captors.
“We insist that allegations from Nigeria that a part of the 200 young female students recently kidnapped in the North-East of Nigeria would have been transferred to Cameroon to be forced into marriage to members of the Boko Haram sect are fully unfounded.
“Cameroon will never ever serve as a support base for destabilisation activities towards other countries,” he was quoted as saying.
The Unites States, Britain, France and China have, however, expressed their readiness to assist Nigeria in rescuing the girls. The US and British military personnel and hardware arrived in the country between Thursday and Friday.
One of our correspondents in Abuja also gathered that the Federal Government would engage Israel in the search for the abducted girls.
SUNDAY PUNCH learnt that the Federal Government and Israeli authorities had held a series of meetings since the girls were abducted on April 14.
A security source said on Friday that the collaborative efforts between Israel and Nigeria on the issue of terrorism and insurgency had been ongoing for some time.
The source who pleaded anonymity said, “The issue of collaboration with Israeli and other countries did not start now, a lot of meetings have been held on insurgency.”
When contacted on Friday, the Press Officer of the Israeli Embassy in Nigeria, Mr. Tony Obiechina, said the embassy had closed for the day and could not respond to the issue.
He said, “We have closed. I will have to meet with the ambassador on Monday to see if there is any information on your request.”
SOURCE: PUNCH