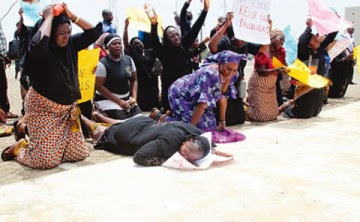 One of the parents of the abducted schoolgirls, Mr. Luka Abana, tellsARUKAINO UMUKORO that the government has failed them
Is your daughter among those schoolgirls kidnapped?
Yes, she is one of them. Her name is Sarah. She is 18 years old. I have two children and she is my second child. Some daughters of our relatives are also missing.
Is your other daughter in school now?
No. I don’t want her to go to school again.
Were you among the parents who went to Sambisa forest?
Yes, but they did not allow us to go further. Yes, we went but we did not find the exact location where our children are.
Are there soldiers in the town now?
The soldiers are in the town, in their headquarters, but I am not in the town now. I stay in the bush because I am also afraid. But soldiers are patrolling the area.
Do you believe that the girls were truly kidnapped?
They were kidnapped. We don’t know their whereabouts.
What would you like the government to do for you?
They should look for our missing children and bring them back to us safely.
How do you feel about your child’s abduction?
I am not happy about the development. My wife,  other parents and I are very worried about it to the extent that we can’t eat or drink. We’ve had sleepless nights since then. My wife cries every time. I try to console her but she keeps crying.
Do you regret sending your daughter to school?
No, I don’t regret it. When the schoolgirls were not kidnapped, I was happy that they were going to school. But now that this has happened, I am not happy about sending them to school anymore.
If you saw their Boko Haram captors, what would you tell them?
I am confused. I don’t know what to say to them now.
Do you still believe that your daughters are still alive?
Since there is life, we still have hope that they are still alive. We are also hoping that the government would help us bring them back.
Do you believe the rumours that the girls have been sold or turned into S3x slaves?
Yes, I’ve been hearing that on the news on radio. The only thing I can say is that we are angry that we have not seen our children. We still have hope that they have not sold our daughters and that they will come back to us alive.
Since this happened, have you been threatened by anyone?
No, all I want is my daughter to come back home to me. I ran away from the town and went into the bush because I am afraid. None of us parents sleep at home now. We are all afraid.
Who would you blame for the abduction of the girls?
I would blame the school principal because she did not shut down the school when she was supposed to, and the government also, for allowing our girls to be kidnapped.
Boko Haram says western education is sinful. Do you agree with them?
No, I don’t. Western education is good. Everyone should go to school and gain knowledge. Even some of the government ministers who have achieved something schooled in this country. We don’t have to go to school abroad. Without education, I cannot read and write. So, it is good for my daughters to be able to read and write.
What plans did you have for your daughter’s education before the kidnap?
Though my daughter would get married someday, I want her to school and also work to make something good of her life. I planned that when she finishes from secondary school, I would buy her a form to go to the university. But with what has happened now, I can’t do that. However, this is not the end of the world. I want my daughter to further her education as much as she wants, but this has discouraged me.