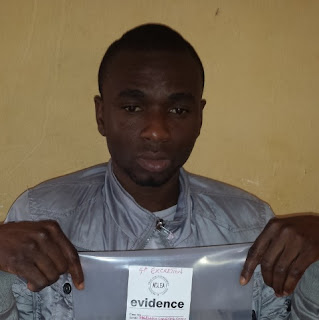 Barely few weeks after the jubilation that greeted the commencement of international flights at the newly upgraded Akanu Ibiam International Airport, Enugu; the National Drug Law Enforcement Agency (NDLEA) has made its first arrest and cocaine seizure. The suspect, Chizoba Anselem Nwabuwa 32 year-old 400 Levels Fine and Applied Arts student was apprehended during the inward screening of passengers on an Ethiopian flight from Brazil enroute Addis-Ababa. He was found to have ingested liquid cocaine packed inside male Cond0ms.

The head of the NDLEA at the Enugu Airport, Mr Nsikak-Abasi Udoh who confirmed the arrest said that the suspect excreted 25 wraps of a liquid that tested positive for cocaine. “The suspect excreted twenty-five (25) wraps of liquid substance. When tested with the United Nations drug testing kit, it tested positive for cocaine weighing 1.250kg. This first arrest and seizure is exciting to us because we just commenced operations” Nsikak-Abasi stated.

According to the suspect, “I am a 400 level student of Fine & Applied Arts at the Nnamdi Azikiwe University, Awka, Anambra State. I wanted to use the half a million naira (N500,000) they promised to pay me in developing my Art Gallery. They assured me in Brazil that authorities will not be able to detect liquid cocaine, so I was confident. Unfortunately, things have turned-out the other way. I regret my involvement in drug trafficking”. Chizoba who is single hails from Ihiala Local Government Area of Anambra State.

Chairman/Chief Executive of NDLEA Ahmadu Giade expressed satisfaction with the arrest. In his words, “the Agency accords high priority attention to all the airports. We shall continue to up-scale our operations at the airports and prevent drug trafficking syndicates from using the nation’s airports”.

Giade urged members of the public to pursue legitimate businesses at all times noting that a good name is far better than ill-gotten wealth.