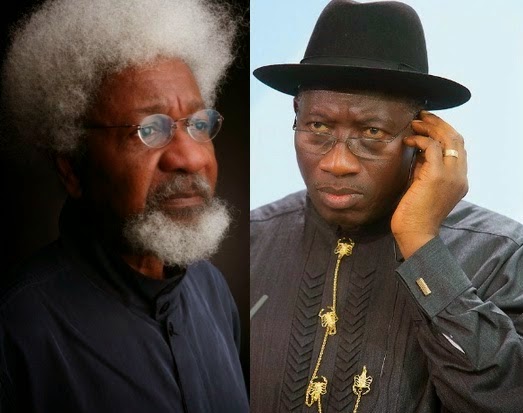 Nobel Laureate, Prof Wole Soyinka today likened Pres. Jonathan to the biblical Babylonian autocrat, King Nebuchadnezzar.While speaking at a press conference at the Freedom Park in Lagos today, with the theme: “King Nebuchadnezzar – the reign of impunity,” Prof Wole Soyinka said Pres. Jonathan’s administration has become known for lawlessness and that Nigerians have been thrown into the furnace of fire just like Shedrack, Mishak and Abednego were thrown into the furnace by Nebuchadnezzar for not bowing down to him.Choi! Lol. Continue to read what he said…

“You should easily recall why I opted for King Nebu – the figure that currently sits on the top of our political pile himself evoked it, albeit in a context that virtuously disclaimed any similarities, even tendencies. Perhaps he meant it at the time when he claimed: ‘I am not Nebuchadnezzar.’ Perhaps not. One judges leaders on acts however, not pronouncements, which are often as reliable as electoral promises. King Nebu remains relevant – and not only for leadership. We, the citizens, are beginning to feel the heat. We wake up each morning to a sensation that we have been cast into the furnace together with those who at least committed the crime of dissent or criticism”.

“The recent choice of a new leader for the guard was clearly no accident, and this hitherto unknown enforcer, one Suleiman Abba, has wasted no time in inaugurating a season of brutish power. When a people’s elected emissaries are disenfranchised, cast out like vagrants and resort to scaling fences to engage in their designated functions, the people get the message”.

He applauded the lawmakers who scaled the National Assembly fence on November 20th, saying it wasn’t a show of shame but rather the finest moments of the lawmakers.In a swift reaction, the Special Assistant to President Jonathan on Public Affairs, Dr Doyin Okupe, described the submission of Prof Soyinka as unfortunate. According to Dr Okupe, “it is quite saddening to note that Prof Wole had become so close to the opposition party so much that he has stopped giving appreciable and unbiased contribution to national topics. Our eminent professor also sadly plays the ostrich as he failed to reprimand Governor Amaechi, who is the ‘national champion of impunity and official recklessness’. The administration of President Goodluck Jonathan prides itself as the most liberal, keeping faith with adherence to rule of law and tolerance,”.He accused the Nobel laureate of ignoring what he termed the immoral, indefensible and unlawful attitude of the Speaker of the House of Representatives, Aminu Tambuwal, after his defection.