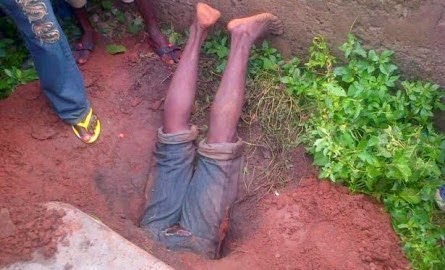 An unidentified young man in Ilobu community, in the Irepodun LGA of Osun State, was found head deep in a grave in the early hours of Wednesday May 14th, after allegedly attempting to cut off the head of a corpse, buried in Tonto compound in the area, Saturday Tribune reports

The suspect’s accomplices fled in terror after seeing half his body get stuck mysteriously in the grave. His death has generated concern among the terrified residents of the Ilobu community.

It was gathered that the victim and his partners in crime allegedly came to Tonto compound in the early hours of Wednesday with a plot to exhume the corpse of an aged woman and sever her decomposed head, allegedly for ritual purposes. Continue… 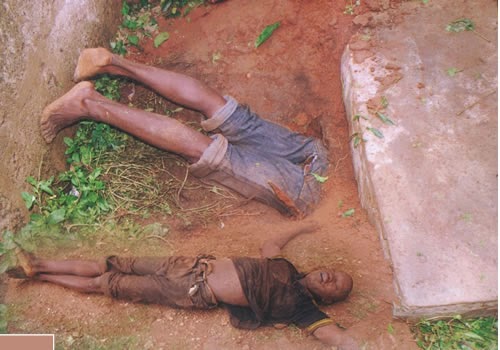 A credible source in the community, who did not want to be named, told Saturday Tribune that “this particular corpse was buried five years ago and the suspected ritualist attended the burial in Ilobu.”
He explained: “There are indications that he did not dig the grave alone. What we discovered is that he may have been attempting to cut off the head of the corpse when something suddenly hooked him as he managed to force half of his body into the grave to cut off the head.
“He got hooked and died on the spot, a development which possibly compelled other ritualists to run away from the scene so that they may not be affected by the mysterious thing that killed (their colleague).”
While commenting on how the residents of Ilobu got to know about the incident, since it happened in the wee hours, the source said a woman who was hawking ogi (a local corn meal) early in the morning of Wednesday spotted the torso of the suspect sticking out of the grave and raised the alarm.
“His corpse was discovered around 6.30am and his head was covered in mud. The residents here alerted the police division in Ilobu and they later came to evacuate the body and put it in their van before taking him away,” he said.
Saturday Tribune was informed that the remains of the suspected ritualist were subsequently taken to and deposited at the mortuary of the Ladoke Akintola University Teaching Hospital (LAUTECH), Osogbo, the state capital.
When contacted, the Commissioner of Police in Osun State, Mr Ibrahim Maishanu, said he was aware of the incident, and that the police would conduct investigation to determine what led to the suspect’s death.
He said the police could not confirm that the suspect was a ritualist because of the circumstances surrounding the discovery of his corpse at a grave in Ilobu; that they would have to investigate the matter before giving any concrete information on the incident.