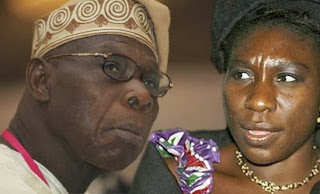 Update: Iyabo Obasanjo has said she does not know anything about this letter. She phoned in to AIT and said the letter is false.

In what is turning out to be a season of open letters, daughter of former President Olusegun Obasanjo, Iyabo, has ruled out further communication with her father till death, describing him as a liar, manipulator, two-faced hypocrite determined to foist on President Goodluck Jonathan what no one would contemplate with him as president.