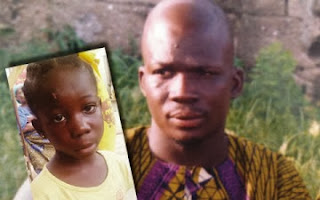 The six-year-old girl in the photo above, Mariam Adeniji, is currently in shock after witnessing the killing of her father, Rafiu Adeniji, who was allegedly shot dead by policemen on Sunday.

The little girl said, “My daddy was driving home when someone hit his car. He went to see the policemen; they just brought out their guns and shot him. They then ran away.”

Mariam, who spoke to Punch while trying to fight back tears, said her father was killed after challenging the policemen over an accident along the Mangoro end of Lagos-Abeokuta Expressway.

Another occupant of the vehicle, Lateef Okesola, who expressed shock at the incident, said it occurred in broad daylight.

He said, “Adeniji, Mariam and I, were all in his Honda car; Adeniji was driving. We were headed towards Agege when we saw a white police patrol vehicle with the inscription, OPS Attack, chasing a commercial bus. So, Rafiu swerved to the side and allowed the vehicle to pass.

“We continued on our journey but after a while, we found ourselves behind the same bus. Suddenly, the driver of the bus applied his brake.”

Unfortunately for Adeniji, he couldn’t stop his car fast enough as his vehicle was said to have hit the bus from behind, causing Okesola to sustain a bruise on his head. An argument was said to have ensued between the bus driver and Adeniji after the motorist demanded payment for the repair of the bus.

The deceased allegedly told the bus driver to blame the policemen for causing the accident.

“The policemen were parked on the side of the road and when Rafiu approached them to discuss what had happened, one of them alighted and shot him in the chest before fleeing.

“It was the sympathisers who gathered, that flagged down another commercial bus to take us all to the Isokoko Police Division,” Okesola added.

After obtaining a police report, Adeniji was taken to the Lagos State University Teaching Hospital, Ikeja, where he was confirmed dead.

Not long after his corpse was taken to his family home at Oshodi, Adeniji was said to have been rushed to a private hospital after a sympathiser claimed he saw the corpse move.

However, Adeniji was confirmed dead again at Jericho hospital.

Elder sister of the deceased, Titilayo Akintunde, described the incident as a nightmare, saying there was need for the government to curb the excesses of policemen.

“One wonders why it is those that are paid to protect lives and property that continue to add sorrows to our lives in this country. My brother was not a thug. He was gainfully employed at NAHCO. He had a wife and two children. Unfortunately, his life was cut short in his prime.

“The case is even more pathetic because he was killed in the presence of his six-year-old daughter and she has refused to eat since the incident. It is a sight that she will never “forget. We want justice for him. Imagine what our mother is going through right now?” she cried.

When contacted, the Deputy Police Public Relations Officer, Damasus Ozoani, said, “There was a shooting in Agege area which led to loss of life. The patrol team within that area has been arrested and their arms have been taken for ballistic examination.”

May the soul of Mr Adeniji rest in peace!