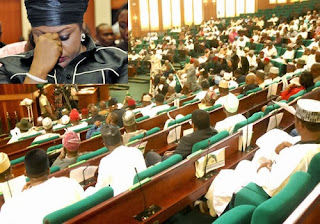 Last Thursday, the Nigerian House of Representatives endorsed the report of its House Committee on Aviation, which had indicted Aviation Minister, Stella Oduah, over the purchase of two BMW cars at the hefty sum of N255 million.

PMNews reports that the report concluded that for approving cars that were not budgeted in 2013 and for an amount far above the approval limit of the ministry, Oduah had broken the law.

It said the minister committed the breach by approving expenditure of over N643m for the Nigerian Civil Aviation Authority to procure 54 vehicles this year.
The House noted that her approval limit as a minister was N100m.

The House asked President Goodluck Jonathan to decide whether he should continue to retain her services as a minister of the Federal Republic of Nigeria.
A major recommendation of the committee, which was adopted, read:

The House urges the President of the Federal Republic of Nigeria to review the continued engagement of the Minister of Aviation, Stella Oduah, for having contravened the Appropriation Act, 2013 and the approved, revised threseholds by exceeding the Ministry of Aviation’s approval limit of N100m by the purchase of 54 vehicles valued at N643m.”

The endorsement of the report by the House elicited a prompt response from Oduah, who described the action as premeditated and with a hidden agenda.

We are shocked and disappointed that in spite of the deluge of representations and evidences provided by the Aviation Minister, Princess Stella Adaeze Oduah and all invited stakeholders on the matter, the House would reach conclusions that have only confirmed that there was a hidden Agenda in the entire exercise from the beginning,” said Joe Obi, Odua’s spokesperson.

“We stand by our earlier submissions to the committee that due process was followed in the procurement of the vehicles by the NCAA.”

He said the evidence before the committee, which was corroborated by the NCAA, showed that the cars were neither purchased for the minister nor in her name, adding that the vehicles were included as a line item under the safety and security vehicles sub-head in the Appropriation Act.
Obi said the action of the Committee and the House were pre-meditated with the sole aim of casting aspersion on the person and office of the Aviation Minister.

We reiterate that the recommendations of the Committee do not reflect the actual course of proceedings at the Hearing. The Minister and the Ministry of Aviation however remain focused in the implementation of the Transformation Agenda of the Federal Government in the sector,” Obi said.