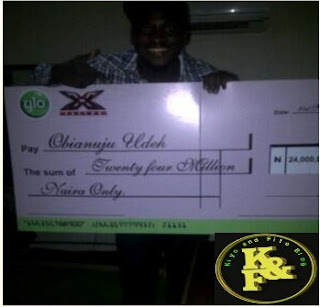 Though the winner of the first edition of The Glo X Factor has not been officially announced, but we can authoritatively tell you that Obianuju Catherine Udeh, fondly called Dj Switch was crowned the Glo X factor winner last night.
Switch, who currently lives in Abuja smiles home with $150,000 (₦24 million), an SUV and a recording contract with SONY music.
DJ Switch, who is the last of eight children, grew up in Warri, but hails from Udi, Enugu State, and she studied Geology at the University of Port Harcourt.
Congrats to the new Xfactor.