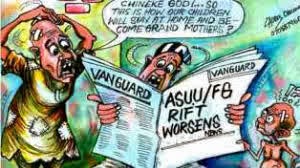 Report reaching EAZYGIST from Minna, Niger State capital, indicates that the Academic Staff Union of Universities, ASUU, has called off its five months strike.
The Union arrived at the latest decision to suspends its strike after a marathon meeting held at the Federal University of Technology (FUT), Minna, Niger State on Monday.
After a protracted debate, the Federal Government and ASUU reached a compromise during a negotiation brokered by the President of the Nigerian Labour Congress (NLC), Comrade Abdulwaheed Omar few days ago.
Details shortly.