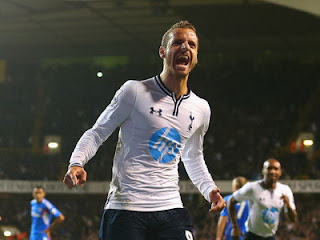 The blame game at Spurs has involved a lot of finger pointing this season, and a lot of those fingers have been pointed at Soldado. Tottenham’s lack of goals has meant that the Spain striker has come under a lot of fire. But it’s Soldado’s first season in the Premier League, and he is a part of a Tottenham side that is very different to the one of last season.

You only have to look at Soldado’s time at Valencia to realise his quality, and given time, you can be sure he will start finding the net soon.

In a season that Arsenal fans have been gagging for a new striker, Giroud has surprised many by being able to step up to the plate. Aaron Ramsey has been grabbing all the headlines for the unbelievable contrast between his performances last season and this season, but Giroud’s have not been far behind.

Seven goals this season, along with five assists is not a bad return at all. Yet many Arsenal fans still want a striker from Arsene Wenger in January?!?

The debate still rages on. Should Mourinho be sending Lukaku out on loan? The Belgian’s eight goals in ten appearances this season for Everton may just be proving the Special One wrong. Lukaku will not be complaining though. He’s the main man at Everton, and is starting the majority of games where he’d struggle to be a regular at Stamford Bridge.

He’s scored more goals than all of Chelsea’s strikers put together. It’s scary to think he’s still only 20.

The big Belgian has came under a bit of criticism recently for his lack of goals. But last season and the early stages of this season is why Benteke is on the list. Everyone knows of his class, and it’s no wonder that he was so sought after in the summer and despite his lack of form, he’s still on many teams shopping list on January.

Once Paul Lambert gets Benteke scoring, his position no this list will be in no doubt.

So far Sturridge has done everything that he has been asked to do this season. It’s unfortunate to see him get injured after nine goals in twelve games so far this season,

This Spaniard has settled in much better than his fellow countryman Soldado. One factor that may have played apart in his swift adaption to the Premier League would be his old Sevilla team-mate Jesus Navas joining him at Manchester City in the summer. 25 goals in 36 appearances last season and averaging a goal every other game for Sevilla.

He’s perhaps been a bit overshadowed by Aguero this campaign, but Negredo has the class, and will surely only get better as he gets used to the English game

Without a doubt the signing of the season. It’s a wonder why none of the ‘bigger teams’ went in for Remy. It’s incredible to think that if he was in a better team then he might score even more.

Eight goals in eleven games has been the main reason why Newcastle have had such a fantastic season and if he continues to fire then they should still be up there by the end of the year.

It’s too hard a choice. Rooney has been in sensational form this year and is showing what he can really do when he is the main man. Yet Van Persie has scored 33 goals in 44 games since he joined in the summer of last year.

When both are in form, they are among the best players in the world. The only problem is that the partnership is not as prolific as many fans would like.

The Argentine’s quality is obvious. He was not so prolific last season, but he has bounced back terrifically. 11 goals in 12 games in the league shows his sensational form this campaign, but his eight assists means that he is crucial to Manchester City’s title challenge.

He has been the brains behind City’s demolitions of Norwich and Tottenham, and don’t be surprised to see the Citizens take apart more teams at the Etihad this season. Aguero will certainly be on the scoresheet, and will probably be on there more than once

This man is absolutely phenomenal. He’s the top scorer in the league already and he missed the start of the season due to his 10 match ban. He has two hat-tricks this term and 13 goals already meaning that he is averaging a goal every 62 minutes. Would Liverpool be where they are without him? No chance. Would he be even better in another team? Possibly.

Suarez’s brilliance is that he creates a lot of chances out of nothing, not only for himself, but for others. Add his five assists to his goals, and that means he has been involved in a Liverpool goal every 45 minutes. Charlie Nicholas reckons he could be better than Kenny Dalglish, voted Liverpool’s greatest ever player.

It’s no surprise that Real Madrid want him, and breaking the bank for him would not be a bad move whatsoever. Controversial, but amazingly talented.

Do You agree with The List??., Feel free to drop your comments