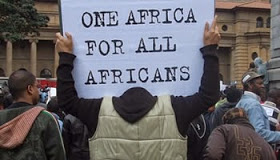 The President of the Nigerian Union in South Africa, Ikechukwu Anyene has raised alarm over fresh cases of xenophobic attacks launched by South Africans against Nigerians and other foreign nationals residing in Sternkopf, Namakwa Municipality, Northern Cape Province of South Africa.Anyene said two cars belonging to Nigerians were burnt while their homes looted in renewed attacks.

“The National Secretariat of Nigeria Union has received report of xenophobic attacks from Mr Kennedy Osagie, the Northern Cape Province chapter chairman of the union. The report indicated that South Africans attacked Nigerians. Two cars belonging to Nigerians have been reportedly burnt and they have been going from house to house looting and destroying their property. Six Nigerians have taken refuge with their families in nearby SpringBok community and they do not know the whereabouts of the other Nigerians” he said.

The Nigerian Consul General to South Africa, Uche Ajulu-Okeke, confirmed the incident, said investigations into the renewed attacks is ongoing

“The Nigerian Consulate in South Africa has received report of new xenophobic attacks in Northern Cape Province of South Africa. The mission has commenced investigation into the incident and will ensure that Nigerians are safe in South Africa,” she said.