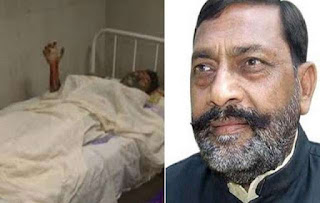 A courageous journalist in India who accused a high ranking Minister of corruption and rape, Jagendra Singh, has been burnt alive by five police officers who were paid to carry out the hatchet job, reports Hindi Times.
According to the report, the police have charged Minister Ram Murti Verma and the police officers with the murder of the journalist was found burned to death just days after accusing the politician of rape on Facebook.
On June 1, 2015, police had raided the Singh’s home and after beating him to a pulp, he was set on fire and later claimed that Singh committed suicide by self-immolation.
However, Singh’s son Rahul, later came forward accusing the officers of burning his father to death. As a result, the politician and the five officers involved have been charged with murder.
Rahul told investigators that the officers, including a senior ranking Inspector, burned his father to death in front of the rest of the family.
“He told me he was hounded for exposing Verma’s alleged involvement in illegal mining and forced occupation of land.”
Singh had accused the politician of illegal land seizures, launching illegal mining operations and being involved in the S3xual assault of a child.
The Indian government has charged Murti Verma, the Inspector and four other police officers with murder while also condemning the brutal incident against a member of the press as an attack on freedom of speech.
Police believe the murder was Verma’s revenge for the journalist’s Facebook posts.