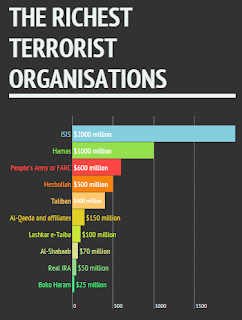 Forbes Israel revealed a list of the world’s richest terrorist networks. It is known that extremist organisations use a lot of ways to earn money. These methods are: drug trafficking, robberies, extortion and donations via NGOs. Terrorist groups get a lot of money from NGOs, charities, financial institutions and even government organization.The ISIS for example, earn by seizing key oil fields and refineries to boost their capabilities, and has an estimated net worth of $2 billion. The recent estimates of US Treasury shows that the ISIS earns about $1 million a day by selling crude oil but according to Forbes, it is making nearly three times the figure.ISIS is followed by the Palestine-based Hamas which has an approximate annual turnover of about $1billion. Hamas has raised its funds due to its takeover of Gaza in 2007 which allowed the group to tax businesses and civilians alike in the region. The al-Qaeda with all its global affiliates stands at sixth place just behind the Revolutionary Armed Forces of Colombia, the Lebanon-based Hezbollah and the Taliban.