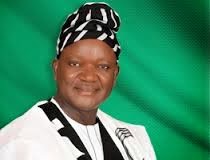 The governorship candidate of the All Progressives Congress (APC) in Benue State, Chief Sam Ortom, Friday escaped death, as unknown gunmen shot sporadically, when he attended the funeral ceremony of a lecturer of Benue State University (BSU), Dr Samson Sambe, in Adikpo, headquarters of Kwande Local Government Area of the state.
Ortom was giving funeral oration when sudden sporadic gunshots left mourners scampering for safety, reports Saturday Tribune.
The window of Ortom’s van was reportedly shattered as the bullet pierced through the roof the car. Another branded Pick-up vehicle was hit at the tail board and the bullet pierced through, came out by the left side and hit a journalist’s car parked close by.
Ortom’s media aide, Tahav Argezua, while speaking on the incident, stated that despite the attack, his principal still went ahead to conclude his oration. But he lodged a formal complaint at the Adikpo police station.
The Police Public Relations Officer (PPRO) of the state command, ASP Austin Ezeani, confirmed the attack to the News Agency of Nigeria (NAN) on Friday in Makurdi.
According to him, the vehicles, a Ford and Toyota Hilux with another utility vehicle, received several shots. However, the police is yet to establish the motive of the attack but had begun investigations into the matter.