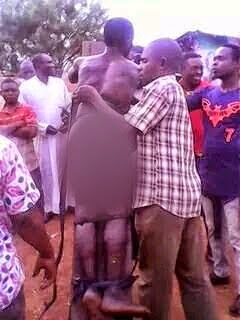 According to a source on Facebook, the Nak3d young man in this picture was tired to a bench in Buruku local government and beaten up for stealing fuel and engine oil worth 15k from one Fear God.

I don’t think there’s any reason making him pass through such treatment, the accusers would have handed him over to the police.I condemn this in strong terms.

I had to blur the picture because the guy was Str!pped completely Nak3d.