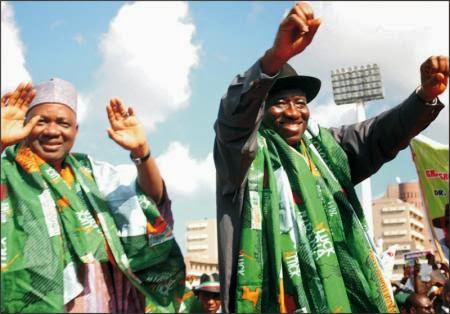 Contrary to earlier speculations that President Goodluck Jonathan will drop his vice, Arc. Namadi Sambo, the president has just announced Sambo as his running mate in the 2015 presidential election. Jonathan who was concluding his acceptance speech at the Peoples Democratic Party (PDP) national convention said: “Arc. Muhammad Namadi Sambo, the loyal and tested person, the dependable and trustworthy gentleman and true patriot will be my running mate and vice presidential mate once more. VP Namadi Sambo and President goodluck Jonathan at the PDP convention yesterday State House Photo  “With your continue support and blessing of Almighty God, Vice President Sambo and I will campaign together and win another resounding victory for our great party in the coming election.” There have been pressures and uncertainty regarding Jonathan’s continuation with Sambo as running mate in view of Sambo’s low profile in the northern parts of Nigeria. In 2011 general elections, Sambo lost all elections in his Kaduna ward and all other elections from state house of assembly to that of National Assembly, governorship and presidential election as well. He became vice president in May 2010 after Jonathan succeeded late President Umaru Musa Yar’Adua who died on 5th May, 2010 in Aso Rock Villa in Abuja after a prolonged illness.