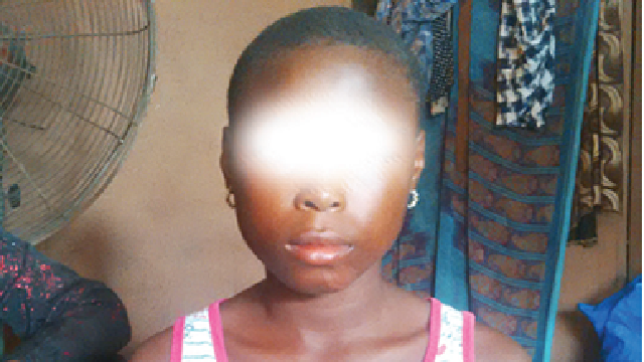 A 14-year-old girl identified as Uzor, has narrated to a non-governmental agency, Project Alert, dedicated to promoting and protecting the rights of women and young girls as well as advocating for zero tolerance for all forms of violence against women and young girls, how her father repeatedly raped her until she almost lost her life.

The man who lives at 4, Akintunde Street,  in Oyingbo area of Lagos State, allegedly pounced on his teenage daughter and raped her so hard that she could no longer walk upright.The victim said her father raped her on the 4th of December, 2014, at about 6:30am after she went to live with him. She explained that she had been living with an aunt after her mother died until her father came to take her away.Fighting back tears, Uzor narrated:“I wanted to shout, but his weight was too much for me. My father is fat and I was struggling not to stop breathing. I was struggling to push him off.”According to the girl, after the death of her mother, she went to live with her mother’s elder sister at Ogijo, an Ogun State community near Ikorodu.The woman was expected to assist the girl in furthering her education, but she did not.“My aunt did not enrol me in school. I used to hawk pepper and tomatoes for her.My father said he was not happy that my aunt did not enrol me in school and threatened to take me away. He eventually came and took me to his house.”But instead of fulfilling his fatherly roles, the man turned the girl into his S3x slave:“I was in the room sleeping when my father called me to warm soup in the kitchen. A few minutes later, he called me into his bedroom.I thought he wanted to punish me when he called me, because I am always scared of him and my step mother. They maltreat me.Before I knew what was happening, my father had pushed me on the bed and pounced on me. He tore off my pants and raped me. When he finally got up, I was bleeding from my private part.I could not walk. But I managed to call the attention of an elderly woman on our street.”The girl said that after the incident, her father left her on the bed and went away.It was the woman who warned Uzor not to tell anyone about the incidence since it was an abomination.“But immediately I left the woman’s house, I went to a pay call centre to call Mrs. Toyosi Bello in Ogijo. I explained the incident to her.”According to her, she knew Bello, who is the Ogun State coordinator for the Centre for Defence of Human Rights, while in Ogijo.The following day, Bello said she went to the man.She said:“I observed that the woman Uzor reported the incident to is shielding her father from arrest. Some elderly men in the area begged me not to expose the matter to the public as that would damage the image of the little girl in future.The girl was immediately rushed to the Federal Medical Centre; unfortunately when we got there, the medical doctors were on strike.”While the father has been on the run, the girl’s step-mother was arrested, but had since been released while Uzor has been handed over to Project Alert.