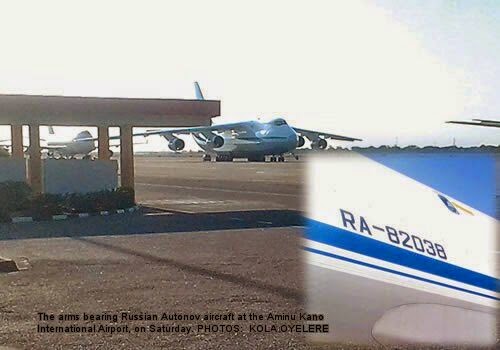 A Russia-made Antonov plane, with six crew members and loaded with two helicopters parts and other sophisticated weapons, allegedly travelling to neighbouring Chad Republic, was intercepted at the Mallam Aminu Kano International Airport (MAKIA), Kano State, by security operatives on Saturday.
Tribune  reports that, the dangerous items discovered in aircraft included twcountry
utility vehicles.The large number of weapons included AK 47 rifles and other weapons.
According to a source, that preferred anonymity, the plane arrived at the MAKIA between 9.00 am and 10.00 a.m.The said plane was alleged to have developed a technical problem when the eagle-eyed security operatives suspected it to have illegal items on board.Security sources said the crew did not make full disclosure of content of the cargo.
Premium Times reported that spokesman for Federal Airports Authority of Nigeria (FAAN), Yakubu Dati, confirmed the detention of the aircraft but did not give further details.
Our source hinted that when a thorough search was effected on the cargo, the above-mentioned weapons were recovered, while the crew members were taken to security department of the airport for necessary interrogation.In the course of interrogating the plane’s mission, it was uncovered that it was coming from Russia.
The crew members were said to have told the security operatives that the plane was on its way to Ndjamena, capital of the Republic of Chad, but that it had to have a stopover to refuel.
Further investigation by Sunday Tribune revealed that the cargo might be moving weapons being used by Boko Haram insurgents to launch attacks on Nigeria.Some residents of Kano State at the airport called on the security to conduct thorough investigation to ascertain whether the plane was heading to Chad or the weapons it ferried are meant to equip insurgents to confront the country.