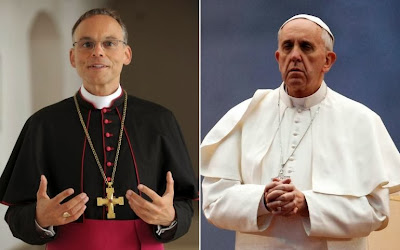 As you read this, Pope Francis has suspended a German prelate, Bishop Franz-Peter Tebartz-van Elst, and he is expected to be on suspension indefinitely. The Bishop, who is now being described as the “luxury bishop” is said to have spend a whooping $43m (about N6.8billion) of Church money on his residence.
An audit of Bishop Franz-Peter’s residence revealed that it is fitted with:
1. a free-standing bath that cost 15,000 euros (N3m),
2. a conference table that cost 25,000 euros (N5m),
3. a private chapel for 2.9 million euros (N594m).

The issue is said to be a major embarrassment to Pope Francis, who has consistently warned Bishops and other leaders in the Catholic Church, and Christians in general, not to live like princes but consider the poor.