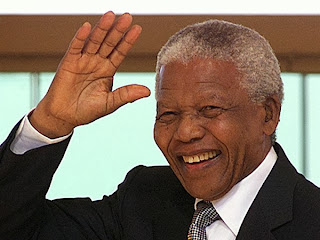 This supposed heartfelt message from two guys who call themselves true ‘Christians’ will definitely leave you shocked and speechless.
Here’s what they wrote on their blog, together with pictures and the captions they put on the pictures about Nelson Mandela, the great hero who just died.

Today Nelson Mandela, former president of South Africa, ended his worldly life and entered the depths of Hell. Mandela was an unsaved heathen, and died without knowing the Lord.

Not only did Mandela influence American Democrat Barack Hussein Obama, but he also practiced a heathen African tribal religion.

Unfortunately, while Mandela did some great things for the nation of South Africa by ending apartheid, Heaven is like an exclusive club, unsaved unwelcome. Mandela died unsaved, and is therefore not welcome in Heaven.

Nelson Mandela was also influenced by Darwinism and Communism! Mandela was an avid reader of Marx in the 1950s, and everybody knows that God hates Communists!

Mandela allied himself with Communists and heathen Indian Gandhi, who is also in Hell. Instead of seeking a Christian approach to freedom from apartheid, Mandela instead turned entirely to heathens. In fact, Mandela and Gandhi even are rumored to have engaged in rampant H0moS3xual acts with each other while planning protests!

Mandela was linked to the American Civil Rights movement, and many members of this movement were Muslims. Know what the Muslims did after they got African Americans equal rights? They crashed airplanes into buildings and started sectarian wars in the Middle East. Nelson Mandela was allied with these heathen scum, and is now being punished for his earthly mistakes.

Tonight I watched many news stations. On every channel, they showed Africans lining the streets of South Africa, doing happy dappy heathen dances, perhaps in hopes that the voodoo rain god might look with favor upon the soul of Mandela.

Unfortunately, these savages are of the same cloth as Mandela. Nelson Mandela may have been a great AFRICAN nature, but by world standards, he was rather lacking. But alas, this is the best that Africa can do. Africa is a heathen continent filled with heathens, and it is no wonder that God allowed the people of Africa to be enslaved.

I implore those Africans still living to reject the sinful ways of Nelson Mandela and embrace Christianity so that they might not follow Mandela into Hell. Let us pray for the Africans, out of love.

Dear Lord Jesus Christ, please lead the Africans away from heathen religions and to You. Please lead the Africans to Christianity so that they may stop being punished with AIDS, poverty, and dirty water, and so that they may avoid the fate of Nelson Mandela and avoid being cast into hell. This we pray in the name of our Lord and Savior Jesus Christ. Amen.

A heartfelt Christian messages from your friends,