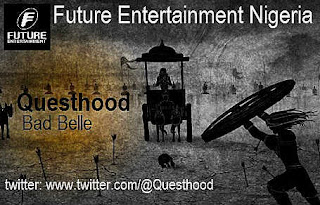 Questhood’s career success is like a whoosh in time. With “matured feelings”, his debut in 2008 and a brief moment of exile, Quest returned in 2010 with “Naija @50”. Still, no one really was giving him a fighter’s chance till we heard “Am Tired” in 2014. Am tired featured JazzyFizzo and TopPlay lead, Embraze and those three hit the correct notes and pressed the right buttons on melodies that have kept him endeared to music lovers and fans. In a short time frame of what now seems like a 9-month comeback, Mr. Hood has paced to the top with a velocity not common to newcomers. His other songs Rule hip hop, Victory and the recent Club banger Bad Belle were received with critical acclaim.
Questhood has collaborated with other industry acts like A’tema, Hilex Quba, Souls, Samsyl and more as well as a fine selection of producers including Charles Creation, Deeyaso and Embraze. It is worthy of note that Questhood’s lyrical endowment have earned him Future Entertainment’s Lyricist of the year award, 2014.‎
Download & Enjoy
DOWNLOAD mp3 Here