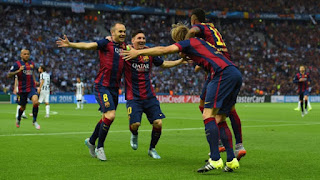 The Spanish side opened the scoring after just four minutes, with Alvaro Morata equalising in the second half before the Uruguayan and the Brazilian secured the win.
Barcelona completed a trophy treble in Luis Enrique’s debut season in charge as they beat Juventus 3-1 in the Champions League final in Berlin on Saturday.
Luis Suarez produced his most crucial contribution of his short career at Camp Nou when he restored Barca’s lead 22 minutes from time to effectively settle the game, after Alvaro Morata had cancelled out Ivan Rakitic’s early opener.
A fifth European title looked set to be a more routine ask when Rakitic – the man to perform so capably in replacing the soon-to-depart Xavi this term – opened the scoring in the fourth minute with a trademark Barca goal, which saw nine of their 10 outfield players touch the ball.
However, while Barca enjoyed the better of the first half from there – threatening a Juve back line shorn of Giorgio Chiellini through injury – former Real Madrid man Morata struck early in the second period.
Having scored twice in the two-legged semi-final against his former club, Morata was afforded a simple finish after Marc-Andre ter Stegen had saved an initial effort from Carlos Tevez.
Suarez was the only Barca man not involved in Rakitic’s opener, but the Uruguayan provided the crucial touch in his side’s second, as he replicated Morata’s finish when Lionel Messi’s effort was spilled by Gianluigi Buffon.
Neymar had a header disallowed, via a handball, as Barca sought to put the game out of sight late on.
But it proved inconsequential in the end, as the Brazilian added a third with the last touch of the match to ensure that Luis Enrique’s side repeated the treble-winning achievement of Pep Guardiola’s Barca in his debut season of 2008-09.
The victory also provided Xavi with a successful send-off to his career with the Catalan giants before he joins Qatari club Al Saad.
European success continues to elude Juve, meanwhile, with the Serie A side coming up short in their attempt to win the continent’s most prized trophy for the first time since 1996 and their own treble bid.
Barca could barely have hoped for a better start, as Rakitic opened the scoring in style in the fourth minute when he was the beneficiary of a spell of neat passing play that bore all the Spanish giants’ familiar hallmarks.
Following Messi’s raking pass out to Jordi Alba, Neymar slipped the ball in to Andres Iniesta. He in turn found Rakitic who finished past Buffon from inside the six-yard box to spark wild celebrations on the Barca bench.
The goal came somewhat out of the blue, with Juve having begun on the front foot. And, having fallen behind, the Italians then saw Arturo Vidal display an uncharacteristic lack of composure, as the Chilean smashed a shot over after a great run from Morata.
The Liga champions began to apply further pressure, and Buffon kept out Dani Alves’ effort with a superb strong, left-handed save. Vidal was then overzealous in his tackling and narrowly escaped a second early yellow card for crashing into Neymar.
Juve had half-hearted penalty appeals turned away following claims of a foul by Alba on Paul Pogba midway through the half but Barca were largely controlled in possession, apparently content to take the pace out of the game.
The threat of Messi, Neymar and Suarez continued to prove a real menace on the break and the latter twice went close to extending the lead with long-range strikes prior to half-time.
Buffon was handed a let-off when he inexplicably gave the ball away to Neymar deep in his own half but he displayed his vast experience to keep Suarez out again early in the second half after a rapid Barca breakaway.
Barca were hauled level when Moratapounced on Ter Stegen’s save after 55 minutes to get Juve back into the game.
Claudio Marchisio’s deft backheel helped Tevez into a shooting position and, when the Barca goalkeeper kept that effort at bay, Morata followed up to tap the ball into an empty net.
With Juve buoyed, Tevez and Pogba both went close, but their momentum was abruptly halted by Suarez‘s close-range finish, coming at a time when the Italian champions were enjoying their most threatening spell.
A trademark dribble from Messi was followed up by a strike that Buffon could not hold, allowing Suarez to tap home his most important Barca goal.
Neymar looked to have wrapped up victory with a header soon after, but the official on the byline spotted his header had deflected off a hand.
Barca legend Xavi was then introduced for his swansong at the expense of long-time midfield companion Iniesta.
It could also prove to be Andrea Pirlo’s final Juve game, with the midfield maestro unable to conjure up any late moments of magic before Barca sealed victory when Neymarscored with the final touch of the match following a quick break.
It completed a season many in Catalunya would not have believed possible when Luis Enrique took over from Gerardo Martino in May 2014, and then saw his position questioned following rocky results and a public disagreement with Messi at the turn of the year.