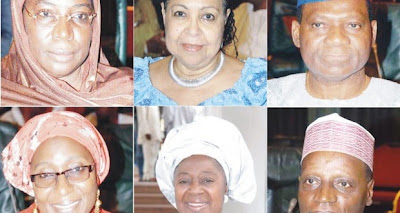 President Goodluck Jonathan sacked nine ministers yesterday – in a shocking move that sparked questions on the motive of the action.
Five factors accounted for the ministers’ sack, The Nation learnt.

According to highly-placed sources in government, some of the reasons are: non-performance; security reports on alleged corruption; political allegiance and doubtful loyalty to the President; poor management of turn-key projects; and the crisis in the ruling Peoples Democratic Party(PDP).

A source, who pleaded not to be named because of the “sensitivity” of the matter, said: “You will recall that the President asked the ministers to sign a performance bond. About four of the nine ministers failed to live up to expectations in the assessment of the Presidency.

“We cannot also rule out alleged corruption acts by two to three of the ministers. For instance, there is a particular outgoing minister who forced the parastatals under the ministry to buy a N17million Sports Utility Vehicle SUV for personal use.

“The money-spinning parastatals were unhappy but they had to do it. It also got to a ridiculous extent that the minister was always asking for remittance of interest accruable from funds kept in some banks by parastatals under the ministry.

“Another minister had problems with award of contracts, some of which were rated as inferior. The agencies supervised by the minister made a joint demand for change.
“Ironically, the minister lost a plum cabinet position at a time a platform was created in a state to fight political adversaries of Jonathan. The minister was dazed when the President announced the sack.”

According to a source, there was also the alleged tardiness in the award of the $1.3billion (N212billion) Zungeru Hydro Project.

The Federal Government is expected to spend about N303million in generating one megawatt of electricity. The hydro project is said to be one of the most expensive in the world.