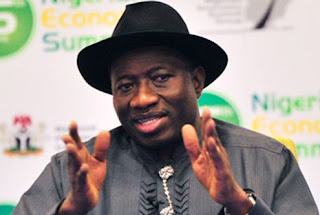 While addressing the 54th Annual Conference of the Nigerian Economic Summit that held in Abuja yesterday, president Goodluck Jonathan blamed the level of corruption in Nigeria on the society. He said instead of punishing corrupt people, we reward them.

“I want a society where all of us will frown against people who come up with what they are not supposed to have. If a young man who just started a job and within six months or a year comes up with a car of N7m to N15m and you clap for him, then you are rewarding corruption.” the president said. More when you continue…

“And until we, as Nigerians are able to do this, then invariably we are all rewarding corruption and until we stop that, I don’t think we will get to where we want to go. We believe that we should not create an environment where people would be tempted to take what belongs to the public because that is why even in the fertilizer business we talked about electronic wallet, e-Wallet, so that funds are not exposed to corrupt people”