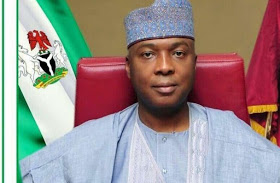 On Friday members of the Senate Unity Forum tried to convert senators loyal to the Senate President, Senator Bukola Saraki to have him impeached and change the leadership of the Senate.
It was learnt that the SUF members, who contacted the pro-Saraki senators, based their argument on the ongoing trial of the Senate President at the Code of Conduct Tribunal and according to Punch, it seems they have been able to get the support of 12 pro-Saraki senators, mainly from the Peoples Democratic Party members.
It was gathered that senators who supported Lawan’s bid had allegedly met with some All Progressives Congress leaders on the need to remove Saraki and that they had started the meeting with the leaders shortly after the Senate went on recess.
A member of the group from the South-West geopolitical zone, who also craved anonymity, confirmed said that they have started reaching out to their colleagues who had joined the camp of Saraki.
He said:

“We know that getting the required figure to carry out an impeachment at the moment would be a herculean task but honestly we hope to achieve it very soon. Already there has been a serious move to get our former party members who are with Saraki now back to our camp.

“I can also confirm to you that we have the support of about 12 Peoples Democratic Party senators who are ready to support any move against Saraki. Don’t forget that some ranking PDP senators are still aggrieved over the emergence of freshers as their principal officers.”

“We learnt that the like minds senators are already working on some of their supporters in the PDP camp to reject the ministerial list by refusing to screen them but we are also ready for them. I won’t disclose our strategy for now.”