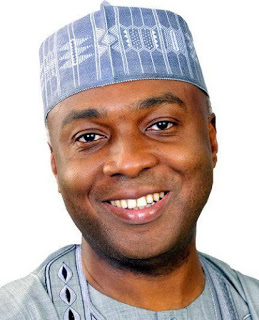 Despite the controversy surrounding his emergences as the Senate President, Senator Bukola Saraki has brushed aside his rejection by the leadership of his party, the APC and unfolded his agenda for Nigerians.
Saraki promised that that the new Senate and National Assembly would make laws that will enable the country to renew its infrastructure, reform the oil and security systems as well as boost agriculture.
Similarly, Saraki assured that the new NASS would make laws that would lead to the creation of jobs and make doing business in Nigeria much more competitive.
“In the coming days we shall be converging to hammer out an aggregate agenda that will help us focus and deliver on these minimum expectations,” the Senate President said.
In a statement made available to Vanguard by his media aide, Bamikole Omishore, Saraki described his emergence as the 8th Senate President was a demonstration that Nigerians were united by a common desire to entrench democracy and allow its core principles to guide the conduct of the nation’s political affairs.
“We have demonstrated that even though we may belong to different persuasions and parties, we are ultimately united by our common desire to entrench democracy and allow its core principles guide the conduct of our political affairs, “Saraki said.
He said he believed strongly that the change that Nigerians yearned for would be made possible through the collaboration of the various arms of government.
He said: “The change that our people voted for is a change from a life of poverty, misery and hopelessness to a life of prosperity, happiness and confidence in the future; a change from a pervasive culture of fear to a life of security and comfort; a change from impunity and elite arrogance to a life of accountability and respect for every citizen, regardless of tribe, gender, religion, region or political persuasion.
“This is the change that all of us in this National Assembly must strive to bring about, if we must justify the privilege of representation conferred on us by our people. Nigerians want to see a proactive National Assembly that will devote itself to rigorous thinking, rolling up sleeves to forge a new and prosperous Nigeria.
“As the President of the 8th Senate and the Chairman of this National Assembly, I shall be guided by the enormity of the responsibilities that this moment imposes on us all.
“As a first among equals, I shall strive at all times to be just, equitable and fair to all. I shall work with you all to build a National Assembly that will enjoy greater confidence and trust among the people that we represent.
“We shall entrench greater openness and accountability. We shall strengthen our capacity for public engagement as well as broaden access for inclusion, recognizing that this temple of democracy belongs to all the people of our country.
“Modern democracy is built on the principle of separation of powers. It will be my responsibility to protect the independence of the legislative arm of our government in the overall interest of our democracy.
“However, I will pursue this duty with the understanding that our autonomy must be embedded within the collaborative framework that allows government to function more effectively in bringing the greater good to the greatest number of our people.
“Our quest for autonomy must not lead us into pursuing adversarial relationship with other arms of government, especially the executive. Our oversight duties must be constructive, supportive and productive, believing that while we all have different roles to play; we have a common responsibility to the people of Nigeria.
Saraki thanked President Muhammadu Buhari for not interfering in the process that led to his emergence as the Senate President, saying that he had laid a solid foundation for the stability of the 8th NASS.