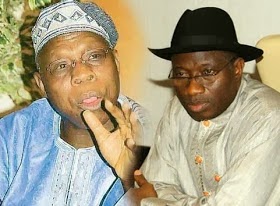 The seed of the stand-off between President Goodluck Jonathan and his estranged benefactor, ex-President and well respected African bridge builder, Chief Olusegun Obasanjo, was sowed about two years ago, before blowing into the open on Wednesday. Their differences revolve around seven issues.
Although the duo, against all expectations, shared breakfast in Nairobi, Kenya, on Thursday, it was gathered that President Jonathan may henceforth keep Obasanjo at bay on account of his “toxic” letter. Presidency sources said the anger generated by the letter is yet to subside.
Below are the seven issues that led to their current fight:
•Rejection of some ministerial nominees and chief executives of departments and agencies from the South-West from Obasanjo;
•Alleged refusal of Jonathan to consult Obasanjo on key policies and decisions of the government;
•Disagreement over the leadership of PDP at national level and in the South-West, especially the sack of Obasanjo’s loyalists like ex-Governor Olagunsoye Oyinlola, ex-Governor Segun Oni and Bode Mustapha;
•The rise of G-7 and ultimate defection;
•Obasanjo’s allegation of Jonathan’s administration of lack of direction, especially on anti-graft war;
•Use of international fora to write off the administration of Jonathan; and
•Second (or third) term aspiration of Jonathan.
Investigation by The Nation revealed that Jonathan and Obasanjo had been patching their relationship over the last two years. Some months ago, Jonathan was said to have confronted Obasanjo and accused the ex-president of undermining him.
Jonathan, sources said, accused Obasanjo of supporting the PDP G-7 governors. It was learnt that Obasanjo denied the allegation and assured Jonathan of support.
The source added: “Obasanjo’s disagreement with Jonathan started from the ministerial nomination. The ex-President sought input into nominations from the South-West, but Jonathan restricted him to Ogun State. He said Obasanjo could not single handed nominate ministers from the South-West when there is a PDP structure in place.
“The ex-President was also not happy that the Jonathan administration does not consult him on all policy issues, decisions of the government and strategic appointments. The ex-President felt the President had been hijacked by those he did not want in government,”the source said.
One of those who allegedly “offended Obasanjo” in the past was Secretary to Government of the Federation, Chief Anyim Pius Anyim. His appointment was said to have been made without consultation with Obasanjo.
When the matter was brought to Anyim’s attention, he personally went to meet Obasanjo to plead forgiveness for whatever offence he might have committed. Obasanjo reportedly told Anyim there was no quarrel.
The emergence of Bamanga Tukur as the National Chairman of PDP and the attendant crisis in the party appeared to have deepened the crack in the relationship between the two leaders, while the alleged hijack of the South-West PDP structure from Obasanjo, and given to alleged criminals, remains a big issues.
“But with anti-second term campaign for Jonathan, it was strategically important for the PDP to restrict Obasanjo to his only vote at the PDP National Convention for presidential primaries than to allow him control the party structure and wreak havoc,” one source said.
Several ex Generals are said to be angry with Jonathan but they are allowing Obasanjo to speak because they are of the believe that his words carry weight. Sources say more heat is coming….