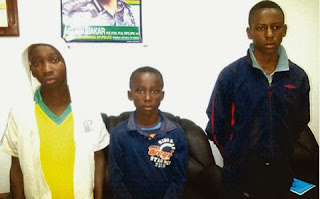 The only disadvantage of celebrating and giving scholarship to Daniel Oikhena is this – copy cats.
Apparently impressed by the national recognition Daniel got for beating airport security and successfully flying in the tyre hole of a Lagos-bound Arik plane from Benin, three teenage boys have attempted to do the same. Lateef Popolla, 13 (from Ogun State) Amadi Joshua, 14 (from Ebonyi state) and Ukpabio Onyedikachi, 14 (from Abia State) were arrested at different times at the Murtala Mohammed International Airport, Ikeja by the Airport Command of the Nigeria Police Force for allegedly attempting to illegally board some international flights in Lagos, Punch reports.

The commissioner of police at the airport command said the boys were found at different times at the airport with the aim of getting into any plane and travel out of Nigeria. The boys deny they were attempting to board any plane…

The teenagers gave different reasons for their actions. Lateef who is a Primary 3 dropout who resides with his grandmother said he went to the tarmac to see the planes and thereafter decide on where he would travel to. he was arrested after he came out from one of the airport apron buses. he said ” I actually wanted to travel but I have not yet decided where I will go. So, I just went to the tarmac to see the aeroplanes.”
Lateef’s grandmother, Adunni, said she had no idea that her grandson was nursing the idea of travelling out of the country. She said she had been responsible for his upkeep  since his mother abandoned him at infancy. I did not know that he wanted to travel. I just did not  see him last week and I started looking for him all over the place. It was on Saturday that I finally found out that he had been arrested,” she said.
Onyedikachi and Joshua were said to have been arrested after asking some security agents where Malaysia flights were boarding. Onyedikachi who has a brother that resides in malaysia nursed the intention of travelling to see him. After being questioned, the boys, who were both in SS1, said they had no travel documents and were immediately arrested.
Onyedikachi, however said, “We were at the departure area of the airport. We did not attempt to travel out. We were just loitering and wanted to see the aeroplanes. We did not want to travel out on that day.”Onyedikachi’s mother berated her son for his escapade. She said she had warned him and Joshua to be well behaved at all times. She said, “I had no knowledge of what they did. Onyedikachi is well taken care of and is not suffering. I don’t know what pushed him to do this.”