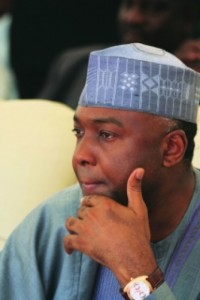 For a Senate that had four years to pass bills to decide to pass 46 bills in less than ten minutes as its tenure winds down is unbelievable. But not only for outsiders but also for some members of the red chamber. One of them is the Chairman, Senate Committee on Environment and Ecology and Senate Presidency hopeful in the 8th Senate, Senator Bukola Saraki.

The new Senate must now learn and show that it has the vigour and drive to work harder through enriched deliberations to pass important bills that form the core of its agenda rather than be seen as a last minute assembly where important bills are rolled through the process in 10 minutes,” Saraki said in a statement to mark the end of the 7th Senate.
“My view is that it was important that we pass those laws but I have my reservations on the railroading of over 46 bills in 10 minutes. History will not be too kind to us on this count.
“This is made even a little steeper by the commentary that must follow that after another four years, the National Assembly was not able to pass such watershed bills like the PIB, the Federal Competition Bill and the NOSDRA Bill amongst many other bills that have the regulatory potential of changing the way our economy operates,” the former Kwara governor added.
Saraki also faulted the poor handling of the ill-fated Nigerian Immigration Service recruitment exercise by the leadership of the Seventh Senate, expressing regret that the the senate did not act on the report of the probe instituted by the Senate on the unfortunate incident during which many young Nigerians lost their lives.
“I remember sadly, the events of some of our youths who went to seek employment from government and lost their lives, needlessly, in a government arranged employment test.
“We missed at this occasion, the opportunity of that ill-fated occasion to show leadership and properly set a new standard of responsibility in the conduct and attitude of our public office-holders.”
While he remained hopeful that he will emerge its president, Saraki urged the incoming 8th Senate to develop and promote a coherent national agenda which it would pursue in order to support and the direction of Nigerians and the government.
“We have to tell ourselves the home truth; we have missed the cut on the level of our effectiveness, especially so with regards to amending laws that impact on the revenues and expenditures of the state, budget reforms, infrastructure financing and deployment, accountability instruments and agency laws.
“The Senate, also, has not carried its integrity far enough to secure its independence which may have emboldened the police on the 20th of November 2014 to invade the precincts of the Assembly, desecrating it in a manner never seen before within the precincts of the Assembly.
“The Seventh National Assembly allowed itself to be enmeshed in fights and political wars that only served selfish purposes and party politics with little general public good.
“The result of which was the further dilution of public perception of the Assembly and the weakening of its general influence and authority,” he said.
“We have had several opportunities to cause the executive to implement our resolutions and ensure full implementation of budgets but never took any.
“As a policy defining institution, the Seventh Assembly did not do much to advance responsible governance.”
“Looking back, we can pat ourselves on the back in the way we had handled some of the tH0rny moments but we must also look back and agree that in certain respects we need the incoming Senate to make amends.
“Why Nigerians all over the country and beyond still question the effectiveness and efficiency of the National Assembly as a legislative body that can help deliver democratic dividend and rule of law in Nigerian today is because in their assessment, the activities of the National Assembly has not fully converged to their expectations.
“Nigerians are unanimous in pointing to the fact that the level of accountability, transparency, certainty, competitiveness, continuous improvement, efficiency, innovation, integration, evidence-based decision-making at the National Assembly still leaves much to be desired,” Saraki said.