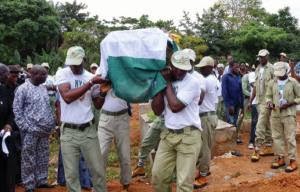 The National Youth Service Corps (NYSC) on Wednesday in Minna presented N26.7 million cheques to the families of the two corps members killed in the 2011 post-election violence in Niger.
The News Agency of Nigeria (NAN) reports that 61 other corps members who were injured during the violence are also to benefit from the gesture.

Alhaji Saidu Kpaki, Secretary to the Niger State Government (SSG), who presented the cheques on behalf of the government, advised youths against being used as thugs by politicians.

“Time has come when youths should take their destinies in their hands by resisting politicians who would lure them to self destruction for personal gains’’, Kpaki said.

“I do not see the crisis as that of religion. May be it is political or joblessness or as a result of poverty. Tell whoever that wants to recruit you as thugs to bring his or her son to lead the way.

“Taking up arms in the name of religion is against all known religious norms. Religion is, and should be out of one’s volition. it is never compulsory.”

Earlier, Mrs Justina Andirya, the NYSC Coordinator in Niger, said the Federal Government was pained by the death of the corps members and the sufferings of the injured.

She said no amount of financial compensation would replace the dead loved ones.

Andirya said the financial support for the injured was based on the degree of injury.

In his remarks, Mr Adebayo Adesanya, President of the Nigeria Christian Corpers Fellowship (NCCF), expressed appreciation to the Federal Government for the gesture.