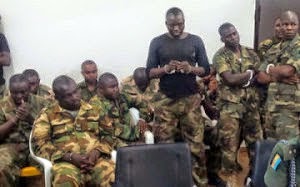 The Abuja Federal High Court has suspended the execution of the 12 Nigerian army soldiers who are on death row due to partaking in mutiny. The order was given to the Nigerian Army to stop the planned execution of the soldiers condemned to death by Army General Court-Martial.This recent order was passed on by Justice Gabriel Kolawole on Tuesday, October 28, 2014 after one Olisa Agbakoba filed a fundamental rights case against the Chief of Army Staff, the Commander, Army Headquarters Garrison, Mogadishu Cantonment, Asokoro Abuja, and the Attorney General of the Federation.The Commander, Army Headquarters Garrison, Mogadishu Cantonment Brigadier-General B. T. Ndiomu had earlier convened a nine man General Court-Martial who tried the 18 soldiers for mutiny and found 12 guilty.The mutiny was said to have taken place at Maimalari Military Barracks on May 14, 2014.Due to the outcome of the sentencing, Agbakoba approached the Abuja High court and requested the death sentence be set aside due to the violation of fundamental rights of the soldiers and inconsistency with the Constitution. The Case is No. FHC/ABJ/Cs/708/14The Army’s chief of staff and commander, Army Headquarters Garrison, Mogadishu Cantonment were represented by a counsel. The case was called in court on October 28, 2014.The Court have however adjourned the case till December 8th of this year and requested the death sentence be suspended until the final ruling of the ongoing trial.