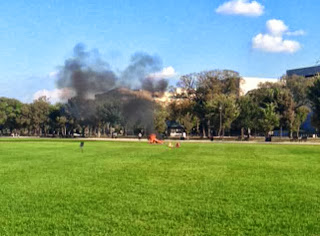 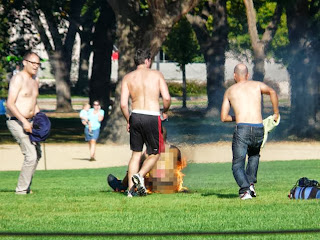 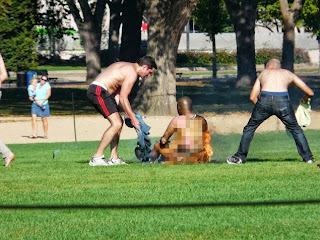 This is not a scene from movie neither is it from Borno or Iraq but the ‘wealthiest nation on earth!’

The man reportedly (and as seen from the pictures) sat down on the lawn, then sprinkled gasoline all over his body, and quietly set himself on fire. He didn’t flinch or move from where he was sitting as the fire consumed him (yes, real fire and not a magic!)

More pictures after the cut

It happened at the National Mall Park where tourists from around the world usually come to with flames and smoke from the self-immolating man were visible from the Capitol, where some staffers watched the scene from west facing windows, just a day after a car chase that ended with the shooting death of a woman just outside the Hart Senate Office Building.

The incident reportedly happened at about 4:30 p.m. on Friday in between the Air and Space Museum and the National Gallery. Passing joggers rushed to the man’s aid, several ripping off their shirts to help beat out the flames that burned 80% of his body

Passersby who saw the man rushed to his aid, several ripping off their shirts to help put out the flames.

“I’m not aware of any signage or any articulation of any causes,” said Lt. Pamela Smith of the U.S. Park Police, which has teamed up with the D.C. police department.
Tommy Hess, a tourist visiting his brother, said he was on the Mall, “milling around, because everything is closed due to the shutdown.”
“I never expected to see anything like that,” Hess said. “It’s crazy.”

Katy Scheflen, a furloughed civil rights attorney in the Justice Department, said she stopped because she saw “a guy with a tripod set up.”

“At that point we didn’t know what was going, maybe it was some sort of stage protest,” Scheflen said. “And then he set himself on fire and went up in flames,” she said. “Whoosh.”

The self-immolation left the man with burns on 80% of his body. Witnesses said his body was charred and his arms and face were white.

“It’s very shocking,” she said. “It’s horrifying. Literally watching this guy go up in flames. There was not really anything anybody could do.”

Scheflen said the presence of a mounted camera gave her the impression “he was aware something was about to happen. Otherwise he was filming nothing but a guy standing there.”

“It was obviously an intentional act,” she said. “Somebody has a video of the whole thing.”

Scheflen said the man may have said something beforehand “but it was nothing intelligible.”