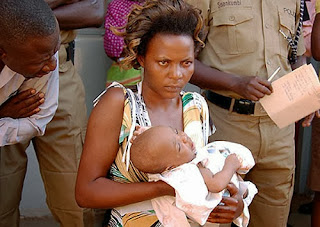 A Zimbabwean woman, 39-year-old Annie Mpariwa who Brea5tfed a neighbour’s baby without her consent faces a possible two-year sentence for deliberately infecting another person with HIV after she tested positive.The case was deferred to October 24 to allow a second HIV test to be performed on the toddler. The child’s initial results were negative. Mpariwa was arrested last week on charges of common nuisance and should the child test positive; the charge will be raised to “deliberately infecting another person with HIV”. The mother of the 14-month-old baby said seeing her child being Brea5tfed by her neighbour was traumatising.

She alleged that her neighbour snatched the child while she was playing outside and hid her in her room. After searching for the child for quite some time, she went and knocked on Mpariwa’s rented room and got no response. Upon peeping through the window, she saw her Brea5tfeeding the little girl.
I was shocked. I nearly fainted,” she said, adding that her bosoms were leaking milk yet she was not a nursing mother or pregnant.

This is really sad. If you were the parents of this child what would you do?