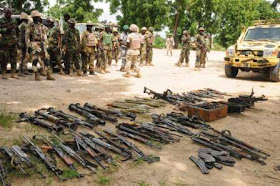 High ranking member of Boko Haram, was captured by the military after a failed attempted attack on Konduga in Borno state, yesterday September 17th.
The sect members actually made a second attempt into Konduga after the military celebrated its victory against yesterday afternoon.

The captured terror leader is currently at a military facility where he is receiving treatment.

In a related development, one soldier was killed after an ambush was laid by the sect members in Benishek, Borno state.

Four motorcycles were captured from the terror group after the attack.