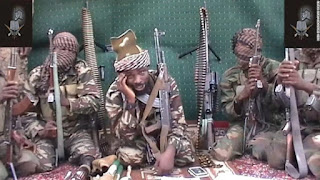 Radical islamic insurgents, Boko Haram may be on their way out of Nigeria if recent reports are anything to go by. Chigozie Ubani, a security expert, who made this disclosure Monday morning, noted that the radical terrorists are already a spent force and they are trying to make Nigerians scared of them with their recent attacks in the north-eastern part of the country.

The devil in flesh: Abubakar Shekau, the alleged leader of Boko Haram, declared war on western values, but at the same time uses smartphones, designed in the West. Ubani, who was speaking during a television programme monitored in Lagos, said: “I am not surprised that Boko Haram is on a retreat, they are on their way out of Nigeria.

What they are doing is just an action to make Nigerians think they are still relevant.