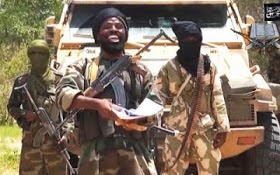 Suspected Boko Haram insurgents killed 48 fish vendors after setting up a roadblock near the country’s border with Chad, the head of the fish traders association told the Agence France-Presse on Sunday.
“Scores of Boko Haram fighters blocked a route linking Nigeria with Chad near the fishing village of Doron Baga on the shores of Lake Chad on Thursday and killed a group of 48 fish traders on their way to Chad to buy fish,” AFP quoted Abubakar Gamandi, head of the fish traders association, as saying.

Gamandi said the attackers set up a barricade at Dogon Fili, 15 kilometres from Doron Baga in Borno State, and stopped a convoy of fish vendors around midday, slaughtering some of them and drowning others in the lake.

“The Boko Haram gunmen slit the throats of some of the men and tied the hands and legs of the others before throwing them into the lake to drown,” Gamandi told AFP by telephone from Maiduguri, the Borno State capital.
It was unclear if the motive for the gruesome attack was robbery or if there were other reasons for the killings.
Boko Haram has once in a while targeted residents seemingly indiscriminately in its deadly insurgency.
Doron Baga, 180 kilometres from Maiduguri, is the base of the Multi-National Joint Task Force, comprising troops from Nigeria, Chad and Niger fighting the Islamist group.
The MNJTF was formed in 1998 to fight trans-border crime but its mandate was expanded as part of efforts to tame the Boko Haram insurgency in the restive region.
Gamandi claimed the assailants killed all of their victims without using their guns.
“The attackers killed their victims silently without the use of the gun to avoid attracting attention from the multi-national troops,” he said.
Kaloma Zarami, a fish vendor in Maiduguri, said he learned of the killings from other traders in Doron Baga.
Zarami said, “The news came to us late yesterday (Saturday) through some of our colleagues who came from Doron Baga to inform us of the incident because there is no telephone service in the area.
“We lost 48 people in the attack. Some were slaughtered and others were thrown into Lake Chad with their hands and legs tied and left to drown.”
A military officer in Maiduguri confirmed the attack but said details were sketchy.
“We heard of the attack near Doron Baga but we don’t have any details because the area falls under the operational jurisdiction of the MNJTF,” the military officer said.
News of the attack was slow to emerge due to the destruction of mobile phone towers in the area by Boko Haram in previous attacks.
Incessant Boko Haram attacks have disrupted fishing and farming along the shores of Lake Chad. Fishermen from Doron Baga have been forced to abandon fishing and have turned to importing dried fish from neighbouring Chad.
Gamandi said the Dogon Fili route provided the safest passage for traders from Doron Baga to Chad as other routes are infested with Boko Haram gunmen who rob and kill travellers.