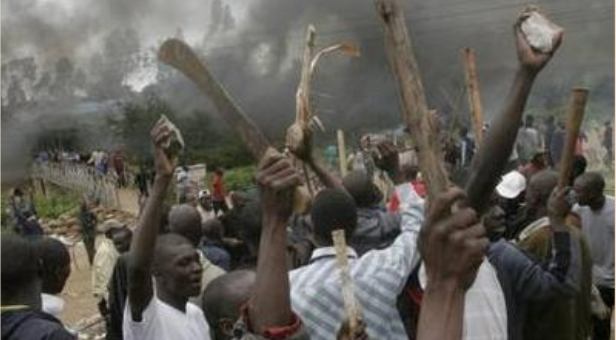 Men of the the Civilian Joint Task Force, a.k.a Civilian JTF, at Biu, Borno State, are said to have killed and beheaded no fewer than 41 suspected members of Boko Haram sect, following a failed attempt by the insurgents to overrun the Sabon Gari village, in Damboa Local Government Area of the state, Thursday.Sources told Saturday Vanguard that the combine efforts of military officers and members of the Civilian JTF pursued the insurgents to Gur area, around Mandafuma village where they engaged them in a fierce battle which lasted for about two hours killing 41 members of the sect, before beheading them and hanging their heads on sticks. The victorious Civilian JTF members displayed the heads of their victims as the returned to Biu amid fanfare.A member of the Civilian JTF, Umar Hassan who confirmed the incident said..

“we beheaded the insurgents after the shoot out which lasted for about two hours and took their heads to Biu to show the people that the Boko Haram insurgents are human and not beasts and so, people should not fear them but instead, join hands with us and security operatives to ensure that the sect members who are enemies of Islam and the people of Nigerians are defeated.”

Umar further said that when his members heard that the insurgents went to attack Sabon Gari, where people were just returning to their homes after three months of exile as internally displaced persons in various camps across the state, they moved in quickly to foil their action pointing out that troops had however arrived the area before them, hence both groups joined hands to defeat them.

“After the insurgents were repelled, they headed towards Mandafuma in Biu local government and took the route to Gur village in an attempt to escape, but again the military and our members ambushed them.
“They were engaged in fierce battle with the soldiers and 41 of them were killed, 1 am alive, no soldier was killed in the ambush. After they were killed we cut off their heads and took them. We asked the people of Biu to stand against the Boko Haram fighters, who are now destroying our villages despite the supposedly ceasefire agreement with government,”