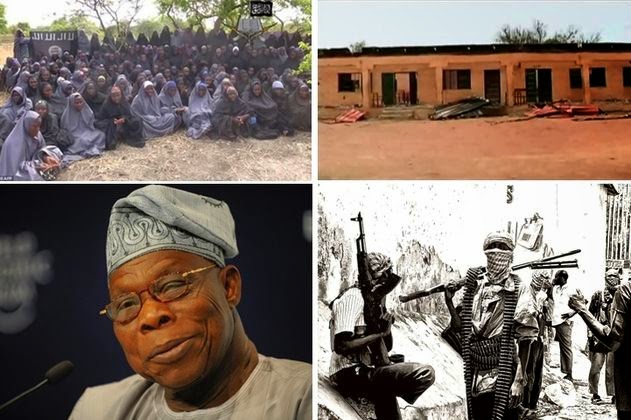 Former President Olusegun Obasanjo has chided the Chief of Defence Staff, Air Marshall Alex Badeh for engaging in public relations at the expense of the emotional stability of the parents of the abducted Chibok girls.
Speaking on television Wednesday night, President Obasanjo dismissed reports that he was launching a solitary mission to rescue the abducted Chibok girls noting that he could not have engaged on the mission without the consent of the presidency.
He spoke against the background of reports by some national newspapers (not Vanguard) two days ago.
Obasanjo who spoke in an interview with Channels television in response to a question on the comment by Badeh that the military knows where the abducted girls are, said:
“The military has got a lot of hard knocks particularly on the issue of Boko Haram and particularly the issue of the abducted girls made the military to try a little bit of public relations, maybe.”
“But this is not an issue that you will do propaganda with. It is a serious issue, it is like spear in the heart of the parents and whatever statement we make and whatever action that we take, if we cannot really deal with the issue in a way that would bring those girls safe and secure and make their families happy and will also give every Nigerian a sense of security, then such statements should not be made.”
He said that he would be pleasantly surprised if the girls are still in one placeOn the intentions of the group, he said: “They have been in existence for years. When I went to Maiduguri and I asked them, how long have you been in existence, they said they were in existence even when I was in government.”
“They said that their objective is sharia and when I was in government, I was going with governance and I didn’t disturb their sharia because sharia is part of our constitution.”