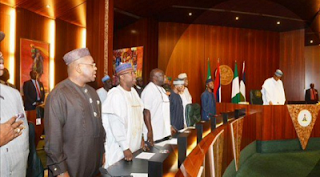 President Muhammadu Buhari on Tuesday said his administration had received firm assurance from the United States and other countries recover and return funds stolen from Nigeria.
According to a statement by the President’s Special Adviser on Media and Publicity, Mr. Femi Adesina, the President said it was now up to Nigeria to provide the international community with the facts and figures needed to drive the recovery effort.

“In the next three months, our administration will be busy getting those facts and the figures to help us recover our stolen funds in foreign countries,” Adesina quoted the President as saying.

The president made this statement to members of the Northern Traditional Rulers Council led by the Sultan of Sokoto, Alhaji Sa’ad Abubakar III, at the Presidential Villa, Abuja.

Citing the report submitted by the Ahmed Joda-led transition committee, President Buhari said that several revenue-generating institutions in the country had been compromised.
In regards to insecurity, the President said traditional rulers would play a key role in stemming terrorism and insurgency in the country.
This, he said, they would do by assisting the government with cost-effective intelligence gathering.
Buhari also assured the traditional rulers that his administration was working hard to end insecurity and terrorism in the country in the shortest possible time with the cooperation of neighbouring countries and the international community.
Acknowledging that Nigerians expected a lot from his administration, the President appealed for patience and understanding while his government works diligently to speedily overcome the huge national challenges it inherited.
The Sultan had earlier presented the Northern Traditional Rulers’ recommendations to the President on issues related to national development.
Source: Punch