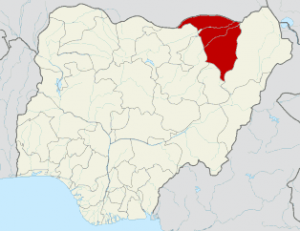 An explosion has rocked Fika, a major town in Yobe state, the police in the state have told PREMIUM TIMES.
Six people are reported dead in the explosion which occurred close to a security checkpoint in the town.
The Yobe State Police Commissioner, Marcus Danladi, told PREMIUM TIMES the explosive device that went off was being conveyed in a car to an unknown location when it suddenly exploded.
The car exploded shortly after it drove past a checkpoint, Mr. Danladi said.
“The people carrying the bomb inside a vehicle were the people who died,” the police commissioner said. “They came from one of the villages where the insurgents are hiding and the same people carrying the bomb were the same people who died.
“Yobe is calm. There is no problem.”
The incident occurred less than a month after Damaturu, the Yobe State capital, came under heavy attack by suspected Boko Haram terrorists who, according to residents, surrounded the town and killed many.
The terrorists had earlier on November 13 attacked the Yobe capital with explosions and gunshots in an attempt to take over the Government House.