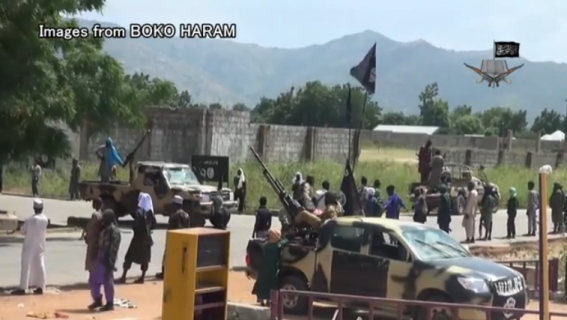 Boko Haram members on Monday attacked Maiduguri and Damaturu, the capital towns of troubled Borno and Yobe states, and killed several people.The insurgents also sacked police stations in the towns and shot at a Nigerian Air Force jet even as they went as far as attempting to take over the Government House in Damaturu.

A security source who preferred anonymity said the insurgents, numbering over one hundred, attacked the Police Mobile Unit where they exchanged gunfire with the police on duty and succeeded in chasing all the police officers away.

But the military reportedly put up a fierce battle to avoid losing the seat of power to the insurgents. And Governor Ibrahim Gaidam later issued a statement to commend the gallantry of the soldiers for successfully defending the Government House.In the attacks on the two state capitals, six people were said to have been killed in Maiduguri where female suicide bombers attacked shops in the Monday Market while the casualty figure for Damaturu, where insurgents reportedly fired consistently for hours, is yet to be released.In Damaturu, the insurgents attacked a police station and opened fire on an air force fighter jet circling the attacked area, witnesses said.The insurgents, sources told Punch, had arrived in the Yobe State capital as early as 4.00am from Gujba and that they started shooting sporadically as soon as they entered the city thus forcing many residents to flee into the bushes.Many residents of the town in areas such as Pawari and Byepass immediately abandoned their abodes and fled. Gujba is in the south-eastern part of the town.The administrative block of the Yobe State University and that of the state radio corporation and the Police Mobile Base, all located along the path of the insurgents were said to have been set ablaze.The witness said, “The military jet has to be deployed to push the insurgents back as the situation is now under control and the entire town has been cordoned off.“The casualties cannot be counted for now but it is massive; the insurgents were overwhelmed and they suffered a lot of death but few police officers and civilians were also killed in the crossfire.”What is really happening? Is this how we will continue in business as usual attitude in Nigeria?