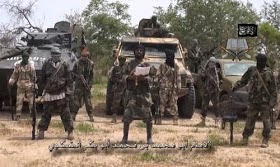 Suspected members of Boko Haram sect yesterday attacked a military camp in Ngelzarma town of Yobe state, burning the military camp as well as a trailer load of grains meant for traders in the town.

According to Daily Trust, the sect members arrived the town at about 4pm and started shooting sporadically into the air. A security source who doesn’t want to be named said that the attackers came in a very large number.

A resident of the town, Malam Hassan Aminu said residents in Ngelzarma had earleir informed the military men stationed in their area of an impending attack by the sect group as they got a hint that the sect members were sighted in a neighboring village.

“We reported to the security operatives but surprisingly they didn’t take any action. The boys (insurgents) entered the town and set ablaze military camp, a trailer loaded with grains and some traders shops in the town. The military camp was burnt by the Boko Haram last year, they returned and burnt it again after being renovated by the state government. No action was taken to avoid the repeat” he said.